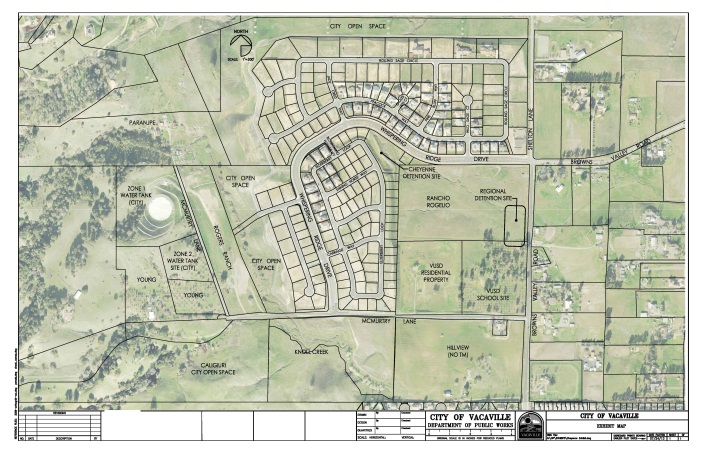 To view the video from the June 17, 2014 Planning Commission meeting regarding the Rice-McMurtry Development Agreement Amendment, click here.

Cheyenne (also called Reynolds Ranch): The 221-lot Cheyenne Subdivision is located along both sides of Whispering Ridge Drive. Prior to the economic recession, DR Horton had built approx 60 homes within the subdivision, and 3 custom homes were constructed by individual property owners. In December 2013, DR Horton proposed new house plans for the remaining lots within the subdivision, not including the remaining 12 one-acre custom home lots. The Planning Commission has recommended approval of the new house plans, but the City Council will be taking final action on this proposal in July or August.

Knoll Creek: The Knoll Creek development is located on the south side of McMurtry Lane, west of Browns Valley Road, and east of the City of Vacaville Caliguiri Open Space Preserve. Originally approved in 2007, the approved tentative map consisted of 38 residential lots on 22.66 acres. In 2013, the 22.66 acre parcel was split into two: Parcel 1, which is comprised of the northeast portion of the parcel, was retained by the property owner for the development of 21 single-family lots. Parcel 2, which encompasses the southwest portion of the parcel, was dedicated to the City as permanent open space. The property owner elected not to develop the 17 lots located on Parcel 2 due to the significant cost to develop this area, which included costs for an upper zone water system, significant grading improvements, and large walls and drainage structures. The minimum lot size for the remaining 21 lots is 10,000 square feet, and all the pad elevations are below 222. There are currently no proposed or approved house plans for this project.

Development Agreement for Cheyenne, Rogers Ranch, and Knoll Creek: The three projects listed above are also subject to a single Development Agreement ( a contract between the City and the three developers) which establishes certain requirements for each party. The City is currently negotiating with the developers to amend the existing Development Agreement to provide detailed timelines for the completion of streets, utility, and landscaping features planned as part of the project. To view the draft agreement,click here.

Rancho Rogelio (now called “The Reserve at Browns Valley”): This project contains 38 single family lots, including 1 custom home lot adjacent to Browns Valley Road. Standard Pacific Homes purchased this project and has received approval from the City Council for their house plans to be constructed on all lots except the custom home parcel. Standard Pacific is underway at this time on grading and construction of the subdivision improvements. This project has its own Development Agreement, thus allowing it to proceed with construction at this time.