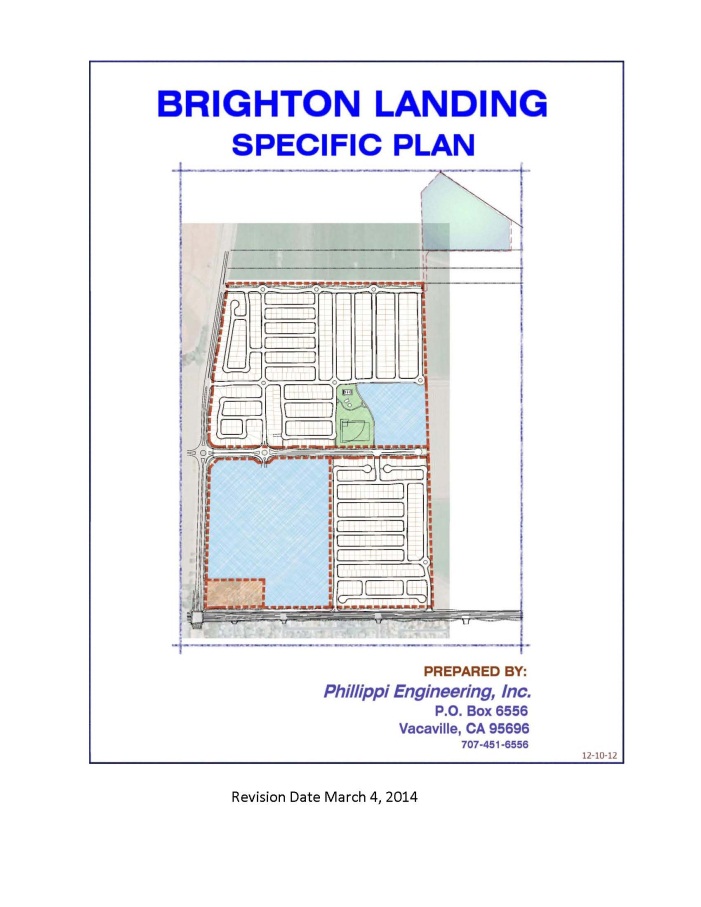 The Brighton Landing Project comprises 217.21 acres (plus 17.60 acres for the off-site detention basin for a total area of 234.81 acres) and is bounded by Leisure Town Road on the west, Elmira Road to the north, PG&E Towers to the east and the Batch Property to the south. The property consists of four (4) land owners: Brighton Landing-Vacaville LLC; John and Jetta Burnett; City of Vacaville; and Evan and Bonnie Wipf. There are two residential houses in the area but the majority of the area is vacant and is used mostly for dry farming. 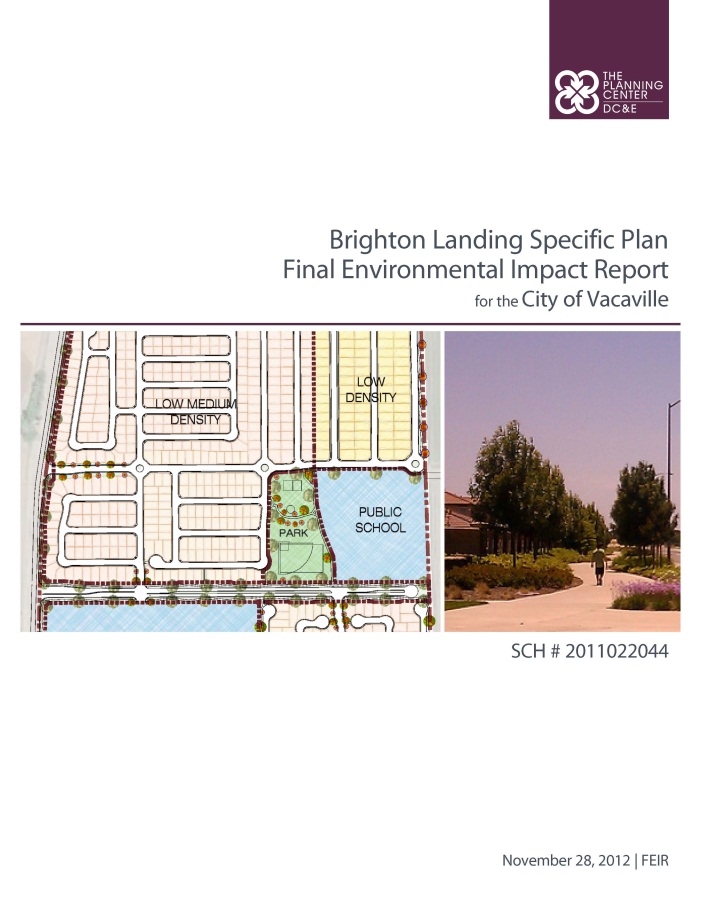 The Brighton Landing Final Environmental Impact Report is now available. The City of Vacaville is the lead agency for this EIR.

According to CEQA, lead agencies are required to consult with public agencies having jurisdiction over a proposed project, and to provide the general public and project applicant with an opportunity to comment on the Draft EIR. This Final EIR has been prepared to respond to comments received on the Draft EIR and to clarify any errors, omissions, or misinterpretations of discussions of findings in the Draft EIR. The Draft EIR was made available for public review on July 9, 2012.

The Draft EIR was distributed to State, regional and local responsible and trustee agencies and the general public was advised of the availability of the Draft EIR through public notice mailed to surrounding property owners, residents, and others in the vicinity of the pro-ject, posted on the site and throughout the areas surrounding the project site, and posted on the City website as required by law. The CEQA-mandated 45-day public comment period ended on August 23, 2012. The City conducted a public hearing to accept public comments on the Draft EIR at the Planning Commission hearing of August 21, 2012.

Copies of all written comments received during the comment period and comments provided at the public hearing are set out in Chapter 5 of this Final EIR. Comments that were re-ceived after the close of the public comment period are not included in this Final EIR. The City will respond to those comments in the Staff Report that will be sent to the City of Vacaville Planning Commission and City Council as part of the project review process.

This document provides responses to comments received on the Draft Envi-ronmental Impact Report (Draft EIR) for the proposed Brighton Landing Specific Plan (Specific Plan) and development project (project or proposed project), and it includes revisions to the text and analysis in the Draft EIR made in response to comments. The Draft EIR identified significant impacts associated with the Specific Plan, and examined alternatives and recommend-ed mitigation measures that could avoid or reduce potential impacts.

This document, together with the Draft EIR, will constitute the Final EIR if the Vacaville Planning Commission certifies it as complete and adequate under the California Environmental Quality Act (CEQA).

The City of Vacaville is the Lead Agency for the preparation of an Environmental Impact Report (EIR) for the Brighton Landing Specific Plan and development project.

The Brighton Landing Specific Plan project proposes development on approximately 217 acres at the southeast corner of Leisure Town Road and Elmira Road. The project would include the construction of approximately 770 single-family homes and includes a 50-acre private high school site, a public elementary school site, a neighborhood park site and associated infrastructure development. The project would include a floodwater detention basin on land near the development but outside the City-limit.

Notice of Availability for the Draft EIR

Below is a link to the Brighton Landing Draft EIR.  The Draft EIR is a large document. As a result it is broken down into five different files.

To view the 2-28-12 City Council staff report with updates and figures showing changes to the Specific Plan to address the General Plan Update, click here