The City Clerk is the Elections Official for the City of Vacaville.  Explore the tabs below for general City Clerk Information, as well as information on the Transition to District Elections, and Election 2020.

The City Clerk administers democratic processes such as elections, access to City records, and all legislative actions ensuring transparency to the public. The City Clerk acts as a compliance officer for federal, state, and local statutes including the Political Reform Act, the Brown Act, and the Public Records Act. The Office performs various professional and managerial duties according to the Municipal Code, and State and Federal Laws. 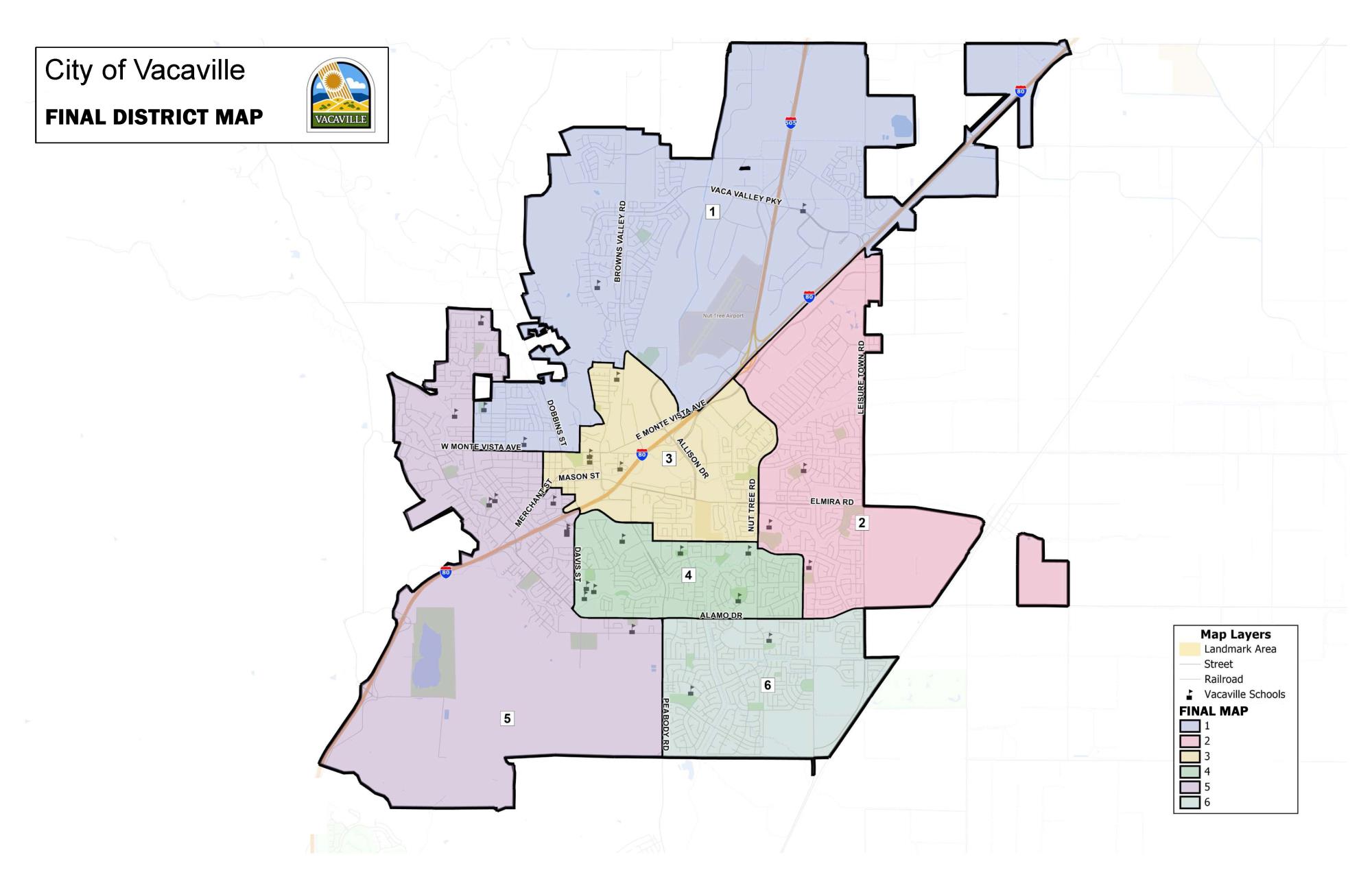 for a description of the district boundaries click here

A. Council members from Districts 1, 3, and 5 shall be elected at the General Municipal Election in November 2020 and every four years thereafter.

B. A council member from District 6 shall be elected at the General Municipal Election in November 2020 for a two-year term.

C. Council members from Districts 2, 4, and 6 shall be elected at the General Municipal Election in November 2022 and every four years thereafter.

Staff report from the May 8, 2018 City Council meeting declaring the intention to switch from at-large to district elections in the City of Vacaville.

Video of the May 8, 2018 District Elections item

Staff report from the May 22, 2018 City Council meeting - First Public Hearing on District Elections in Vacaville.

Video of the May 22, 2018 Public Hearing on District Elections

Video of the June 12, 2018 Pubic Hearing on District Elections

Video of the July 10, 2018 Public Hearing on District Elections

Video of the August 14, 2018 Public Hearing on District Elections

The City of Vacaville General Municipal Election is held in November during even-numbered years. This year's election will be held on Tuesday, November 3, 2020.  After the November election the City Council will be composed of seven Council Members (previously five). Council Members serve for staggered terms of four years. Additional information is available on our District Elections tab and in the Candidate Guide.

The registration deadline is 15 days before an election.  For the November 3, 2020 General Election the deadline to register to vote is October 19, 2020.  Registered voters must be U.S. citizens, residents of the City of Vacaville, 18 years of age or older on the date of the election, and not in prison or on parole for a felony conviction.You may register to vote online at the California Secretary of State's website.  Re-registration is required if you have moved since you last registered, changed your name, or changed your political party affiliation.

To be eligible to run for office, a candidate must be a resident and registered voter of the district, within the City of Vacaville, in which they are running before circulating nomination papers. To determine your district, click here to search by residential address.

This is the period when individuals officially receive, circulate, and file nomination papers for candidacy.

Candidates are encouraged to contact the City Clerk to schedule an appointment to take out and/or file nomination papers during the Nomination Period.

Campaign Financial Disclosure Statements of candidates, as required to be filed during the pre-election period by the Fair Political Practices Commission, are public records and are available for review during business hours in the City Clerk's Office. Copies are available upon request; the copying charge is ten cents ($0.10) per page.