2018 SLURRY SEAL  NOTICE - Copy of the letter sent to residents in neighborhoods that will be impacted by the 2018 Slurry Seal program.

The 2018 Slurry Seal project is expected to begin on August 6, 2018, and includes slurry sealing 757,697 square yards (32 miles) of City streets in the Northern area of the City bounded by Midway Road to the North, East Monte Vista Avenue/Interstate 505 to the East, East Monte Vista to the South, and Gibson Canyon Road to the West.

Below are the streets that will be slurry sealed along with a time frame for when the work will take place. Maps can be found below the streets charts. Please contact public works at (707) 449-5170 or at publicworks@cityofvacaville.com for more information. 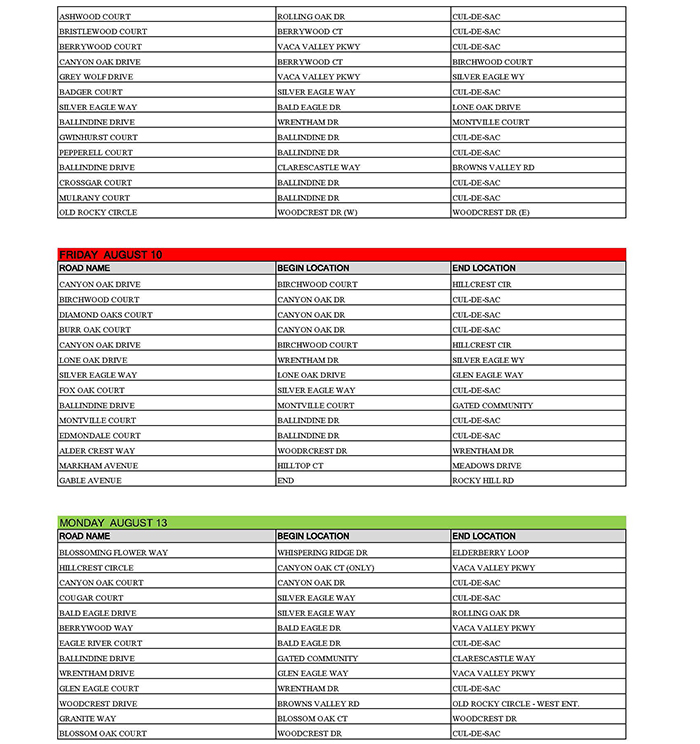 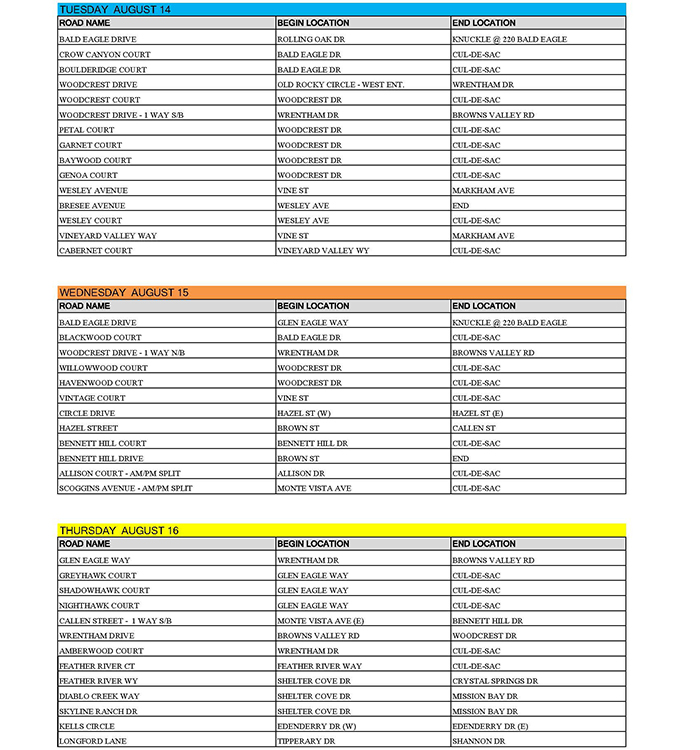 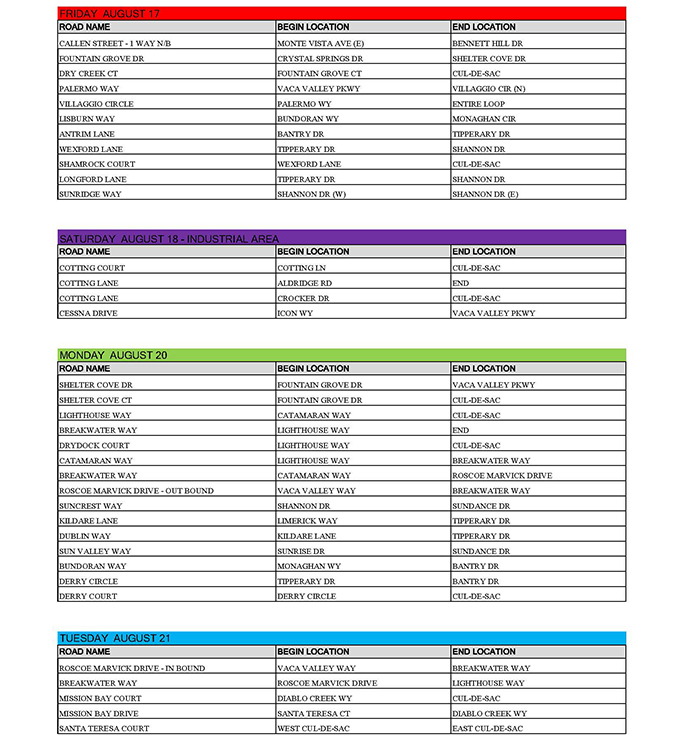 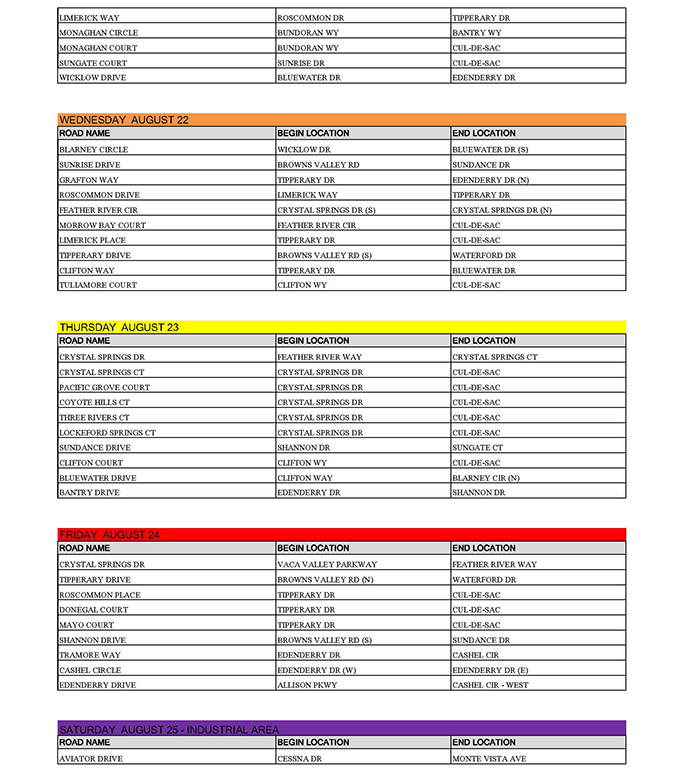 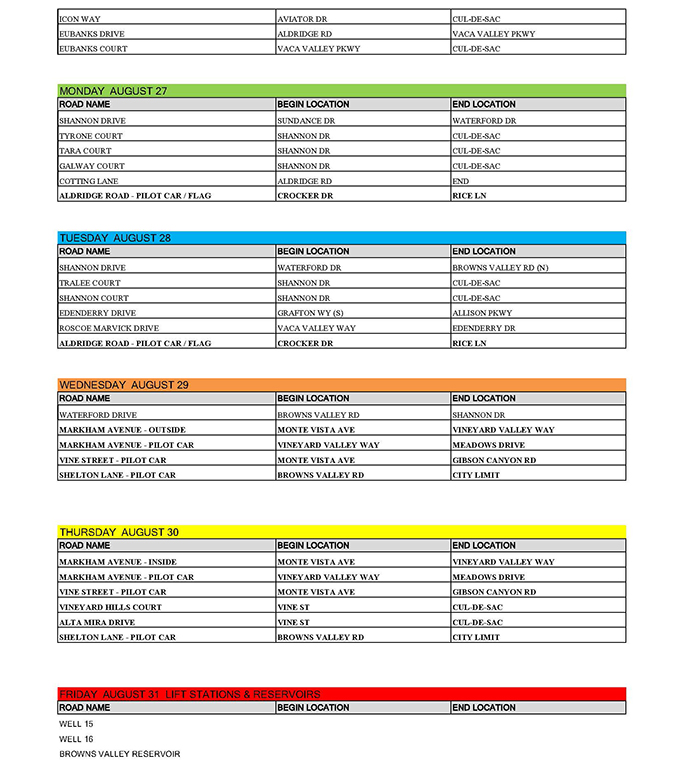 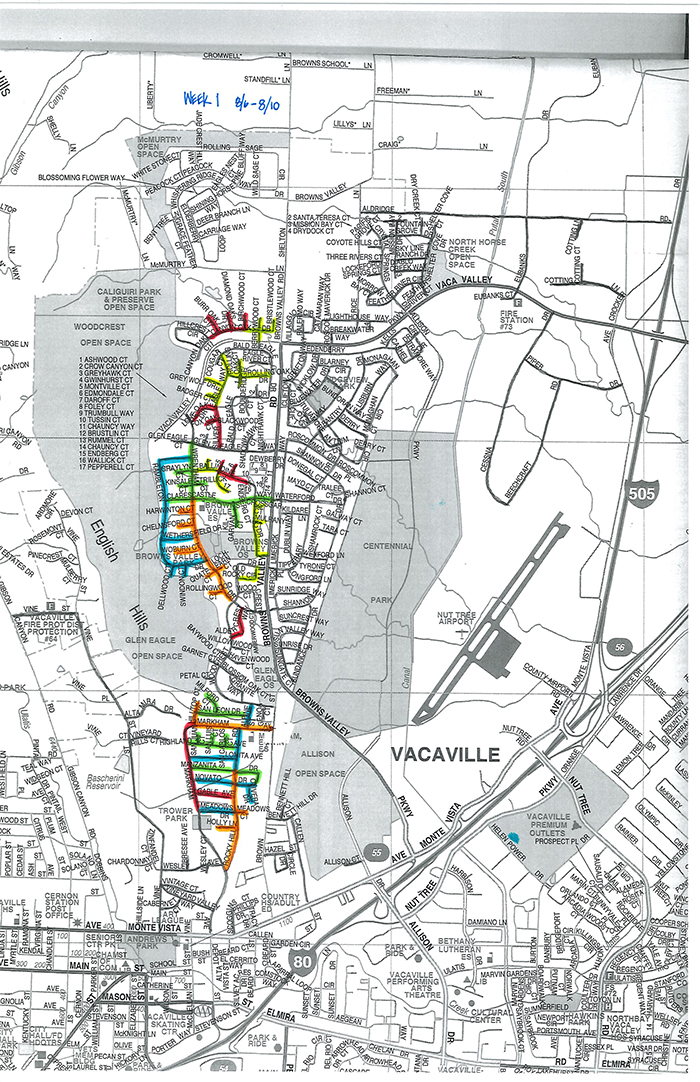 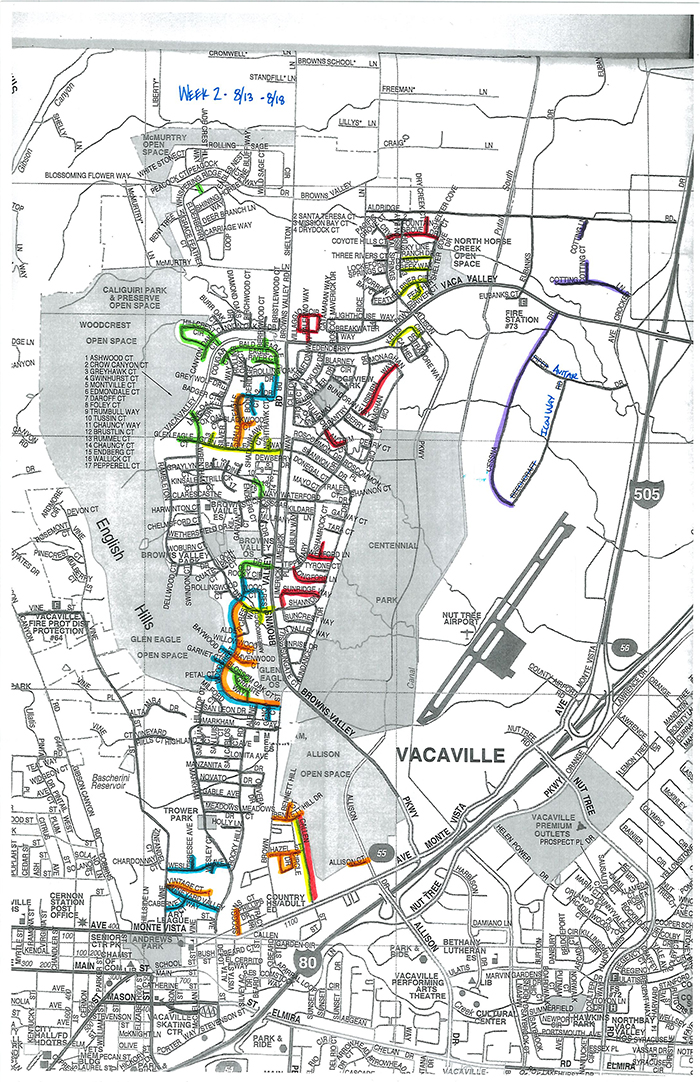 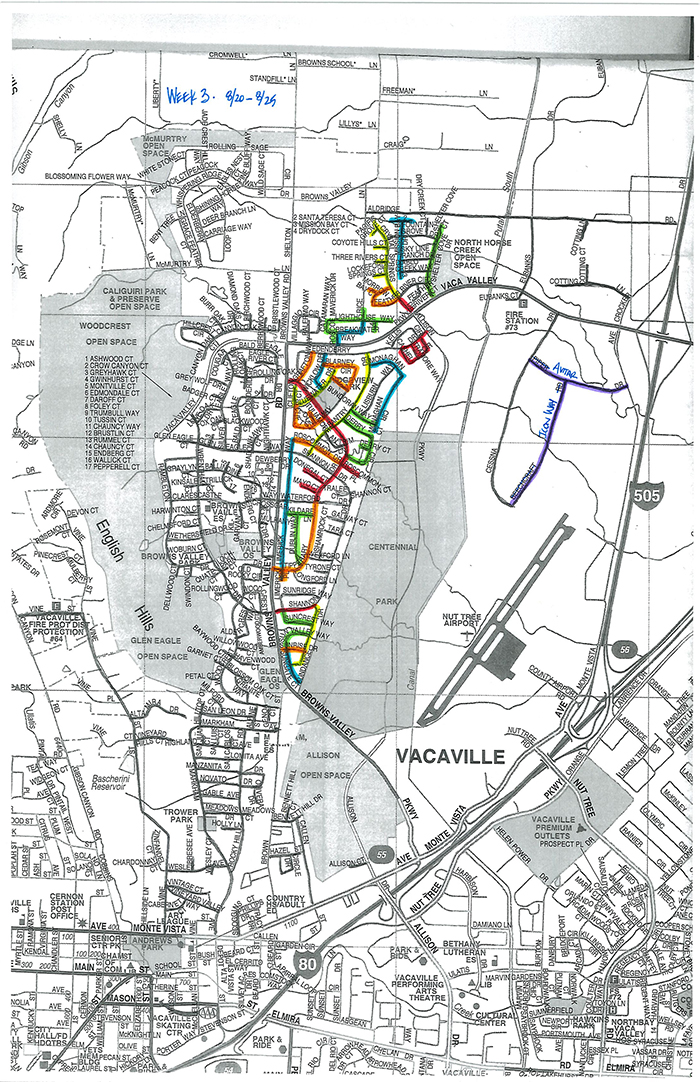 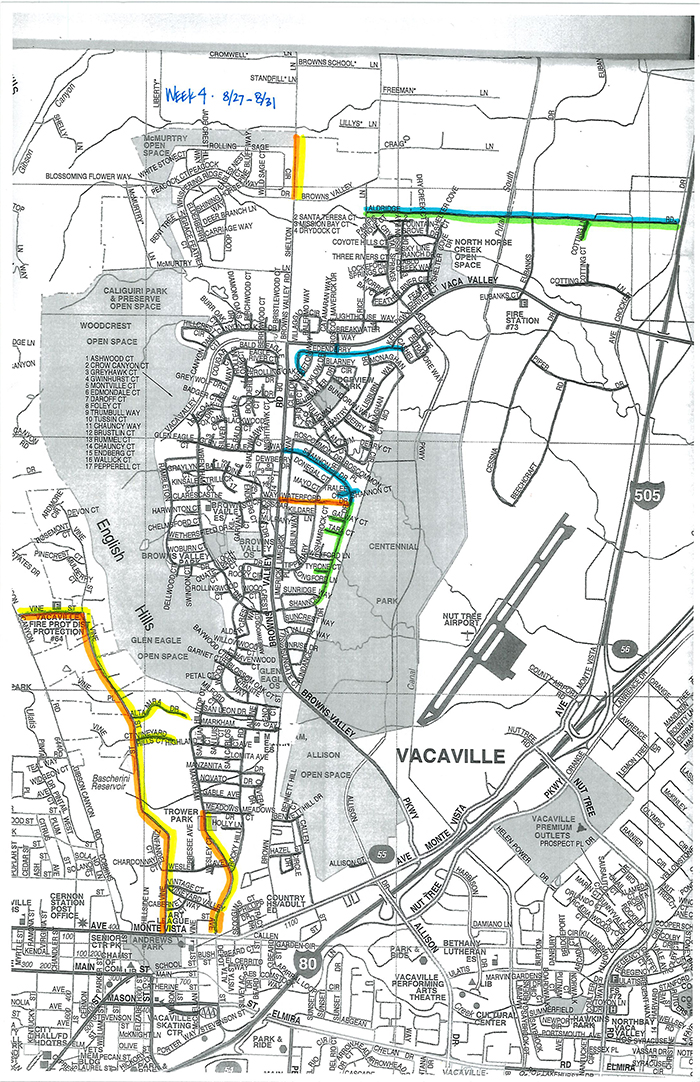 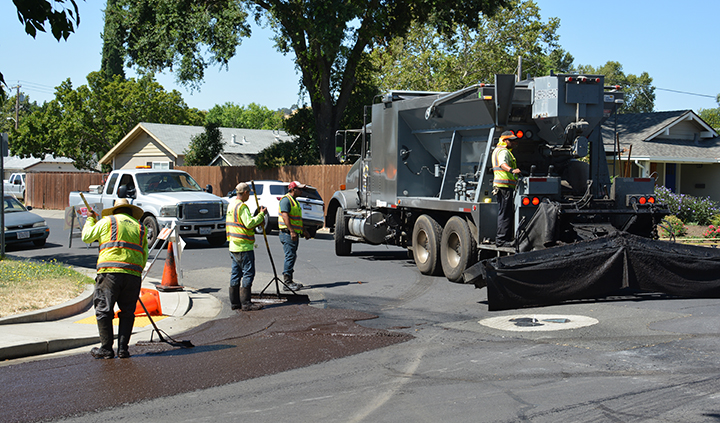 The annual slurry sealing of streets throughout the City of Vacaville is the most cost-effective type of street preventive maintenance treatment. The street maintenance program is designed in such a way that residential streets receive the slurry seal treatment approximately every five years. By slurry sealing the street, the City is able to prolong the length of time between major and more costly repairs. The cost to slurry seal a street is about 10% of the cost of an asphalt concrete overlay for the same street.

The slurry seal is composed of asphaltic emulsion (oil and water), latex additive, and coarse sand. The composition takes about three to four hours to cure in warm weather. The slurry mixture seals the pavement from water intrusion, which can cause deterioration of the street. The slurry seal, when cured, provides a better traction and wearing surface for automotive traffic. Initially, the final product has a rough finish but becomes smoother over a short period of time.

Please contact public works at (707) 449-5170 or at publicworks@cityofvacaville.com for more information.