In addition to handling over 40,000 calls for service each year, our officers actively pursue criminals, remedy unsafe conditions, and enforce traffic laws. We not only respond to your calls for service, we do all that we can to keep your neighborhoods safe.

Field Services is the uniformed division of the Police Department. All officers and CSOs are uniformed and
drive clearly marked vehicles. The Field Services Division is comprised of new recruit officers as well as seasoned veterans. You can be confident that all of our officers are well trained. New officers receive up to six months of formal police academy training and four months of on-the-job training with a specially trained field-training officer before they work on their own. We also provide regular in-house training on a variety of topics important to a successful and safe officer.

Bicycle Patrol
Several officers assigned to Patrol, Crime Suppression Team, and Youth Services have completed a state certified bicycle officer training program. The training prepares the officer to ride over a variety of terrains, safely use firearms and other defensive weapons and make arrests while using a bicycle equipped for police use. The bicycle officers patrol, weather permitting, in areas inaccessible to cars, in locations where a quiet, low profile approach is needed, at community events, and in smaller patrol areas that will benefit from the approach of an officer on a bicycle. In Vacaville, bicycle officers often patrol Centennial Park, downtown alleys, and open space along creeks. Bicycle patrol officers usually have at their disposal a fully equipped patrol car for covering greater distances or transporting prisoners.

Police Service Dogs (PSD)
The Vacaville Police Department has five working Canine Teams. The teams consist of the handler and the Police Service Dog (PSD). Our current teams are as follows:

Our canines provide both patrol duties and narcotics searches. Patrol duties include building searches, area searches, tracking and officer protection, among other duties. Both PSD's have made several apprehensions and are credited with finding many criminals. A majority of the time criminals just give up when faced with our PSD's because they know better than to fight the Canine.

Both PSD’s are used for vehicle searches and search warrants. They are trained to find Methamphetamine, Cocaine, Heroin, Opium, and Marijuana. Both have been deployed on narcotic searches and both have been credited with several finds including ones that criminals hide so well the officer probably would not have found it if the PSD had not been used. 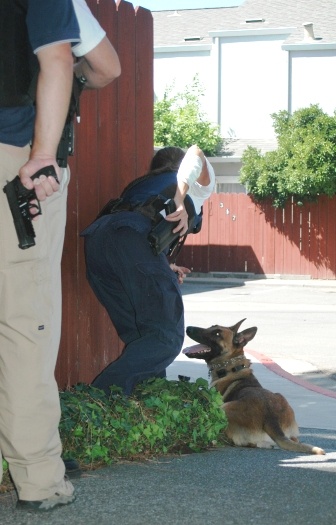 The PSD's also do several school/community presentations and love to play with the children. I f you are interested in Canine presentations, please contact the Police Department and ask for the K-9 coordinator. One of the reasons the PSD's are so friendly with the children is because officers take the Canine home to be part of the family. They are well-socialized and love coming to work. The department has received overwhelming support from the public including funding for the purchase of both PSD's, Kevlar protective vests, hood vents for the vehicles, and other miscellaneous equipment.

Officer Raymond, said, "Being a Canine Handler requires a lot of hard work and dedication, but it is the best job in the department because you get to drive around and work with your buddy every day."

If you are going out of town or experiencing suspicious activity in your neighborhood, you may complete an extra patrol information form. You may obtain and submit the form in our Records Section and the information will be provided to patrol. This is not a guarantee for service. It is always best to call our Communication Center directly at either 9-1-1 (emergency) or (707) 449-5200 to report suspicious activity while it is happening.

What to Do When Stopped by a Police Officer (En Espanol)