As a reminder: All City facilities are closed to walk-in business. If you can get your need met online please make an appointment with the appropriate department. 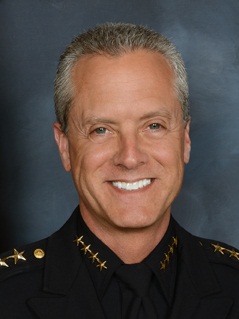 John Carli was appointed as Chief of Police in April of 2014.  His career started with the Vacaville Police Department in 1989 and he attended the Santa Rosa Police Academy. Upon graduating he spent his early years as a police officer patrolling the streets of Vacaville with his K9 partner.

While in Patrol, John eventually stepped into the role of Field Training Officer and then Detective in 1999. While in Investigations he was assigned to the Northern California Computer Crimes Task Force in Napa, investigating computer crimes and identity theft.

John promoted to Sergeant in 2003 and again patrolled the streets of Vacaville, supervising the Critical Incident Negotiation Team, K9 Unit, Firearms Instructors, Police Technology, and the Office of Professional Standards.

John promoted to Lieutenant in 2010 and joined the ranks of the command staff. During the last four years he managed both the Field Operations Division and the Investigative Services Division. As the SWAT Commander during this period of time, he provided extensive tactical supervision and managed all special response teams within the Department.

John holds a Master of Science Degree in Strategic Leadership and a Bachelor of Arts Degree in Criminal Justice Management. Additionally he is an instructor at the Napa Community College and teaches various law enforcement topics including computer crime investigations and Internet intelligence at conferences and training events nationwide. John and his family have lived in Vacaville since 1989. 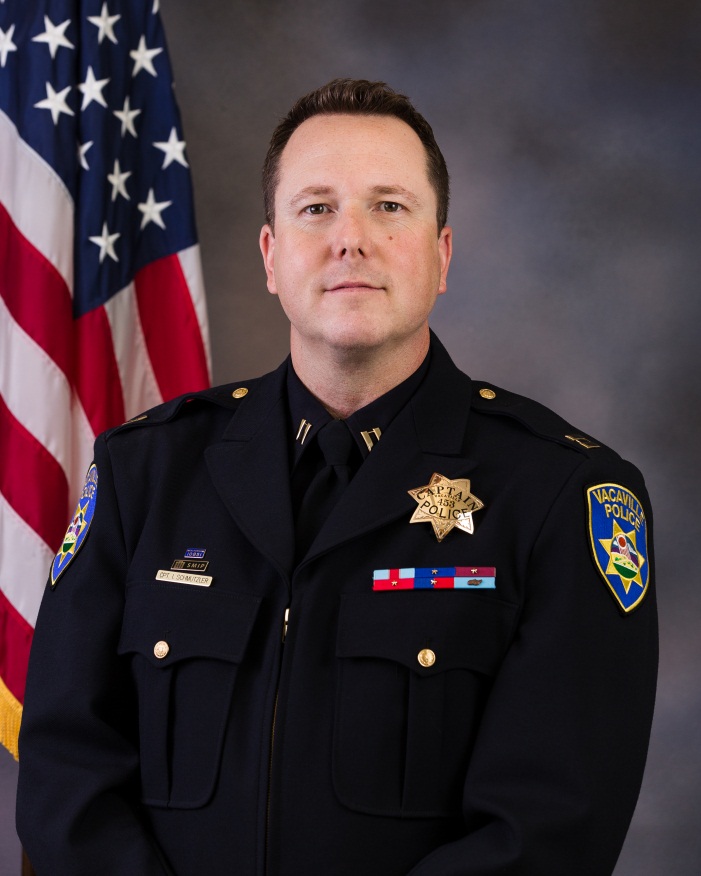 Ian Schmutzler began his career as a police officer with the Oakland Police Department in 1997.

After coming to the Vacaville Police Department in 2000, Ian was a Field Training Officer and a Detective on the Narcotics Enforcement Team. He was promoted to the rank of sergeant in 2006, where he supervised the Defensive Tactics Team, Critical Incident Negotiations Team, Mobile Field Force Team, and Peer Support Team. Ian was promoted to the rank of Lieutenant in July of 2011.

Ian was promoted to Captain in 2014 and oversees the Field Support Bureau for the department.

Ian holds a Bachelor’s Degree and a Master’s Degree in Criminal Justice Management, both from the California State University, Sacramento.  He is also a graduate of the Senior Management Institute for Police (SMIP) and of the POST Command College. He holds a professional certificate in "Law Enforcement Command" from the University of San Diego. Ian teaches various law enforcement topics at the Napa Valley College Criminal Justice Training Center, including use of force law, the “Officer Safety” block, and report writing.  Additionally, Ian had an article on “Homelessness and Mental Illness” published in Police Chief Magazine in 2017.

Matt Lydon was raised in the City of Vacaville and graduated from Vacaville High School in 1989.

Matt began his a career as a police officer with the Petaluma Police     Department in 1994.

Matt returned to his hometown, Vacaville in 1996 and began working at the Vacaville Police Department. While working patrol, Matt served as a bicycle patrol officer and a field training officer.

From 2001 to 2005 Matt worked in the Investigative Services Section as a Detective. He returned to Patrol Division in 2005 and promoted to sergeant in 2006. As a sergeant, Matt was assigned to Patrol, Traffic, and Internal Affairs.

Matt holds a Bachelor’s Degree in Management from Saint Mary's College and a Master’s Degree in Organizational Leadership from National University.

Mark began his career with the Vacaville Police Department in 1995, serving the community he grew up in.  During his career Mark has served as a patrol officer, field training officer, SWAT team member, arrest and control instructor, Taser instructor, Crime Suppression Team detective and Narcotic Enforcement Team detective.

Mark promoted to sergeant in 2010 and was assigned to the Patrol Division.  In 2012 Mark became the supervisor for the department's Traffic Unit.  As a sergeant Mark also oversaw the department's SWAT, Arrest and Control, Fitness, and Honor Guard teams.

Mark promoted to Lieutenant in May of 2014 and was assigned to the Field Operations Division.  In this role he has held management assignments in Patrol, Traffic, Youth Services, the Community Response Unit, and the department’s Volunteers in Police Services program.  As a lieutenant Mark also serves as the SWAT Commander, Press Information Officer, and manages the department’s social media team.  Mark has presented on the benefits of the use of social media and best practices in addressing homelessness by law enforcement agencies at both the state and national level.

Mark holds a Bachelor's degree in Criminal Justice Management and a Master's degree in Organizational Leadership.  He is a graduate of the FBI National Academy and currently serves as a Travis Air Force Base Honorary Commander assigned the 60th Security Forces Squadron.

Chris was raised in the City of Vacaville and graduated from Will C. Wood High School in 1994.

In 2016, Chris was promoted to the rank of Lieutenant.  He currently oversees the Investigative Services Division which includes the Special Victims Unit, Investigative Services Section, VICE, Gang Enforcement Team, Property and Evidence and Criminal Intelligence.  Chris also provides oversight for the Hiring and Recruitment team.  Chris currently holds a Bachelor’s degree in Criminal Justice Management and a Master’s degree in Organizational Leadership.

Scott promoted to Sergeant in 2011 and was assigned as a Patrol Sergeant. In 2014, Scott became the supervisor of the Narcotic Enforcement Team. In 2016, Scott assumed command of the newly formed Vice / Street Crimes unit where he supervised investigations related to Drugs/Narcotics, Human Trafficking, Guns, Gangs, and street level violent crimes.

Scott was promoted to Lieutenant in 2016. As a Lieutenant, Scott is involved with leading the Mobile Field Force Team, the K9 Program, is the Department Range master, oversees the Communication Center, the Field Training Program, and the Emergency Vehicle Operations program. At the present time, Scott is the Solano County Mobile Field Force Commander.

Scott holds a Bachelor’s degree in International Relations from the University of Southern California (“Fight On”), and a Master’s Degree in Criminal Justice from CSU-Sacramento. 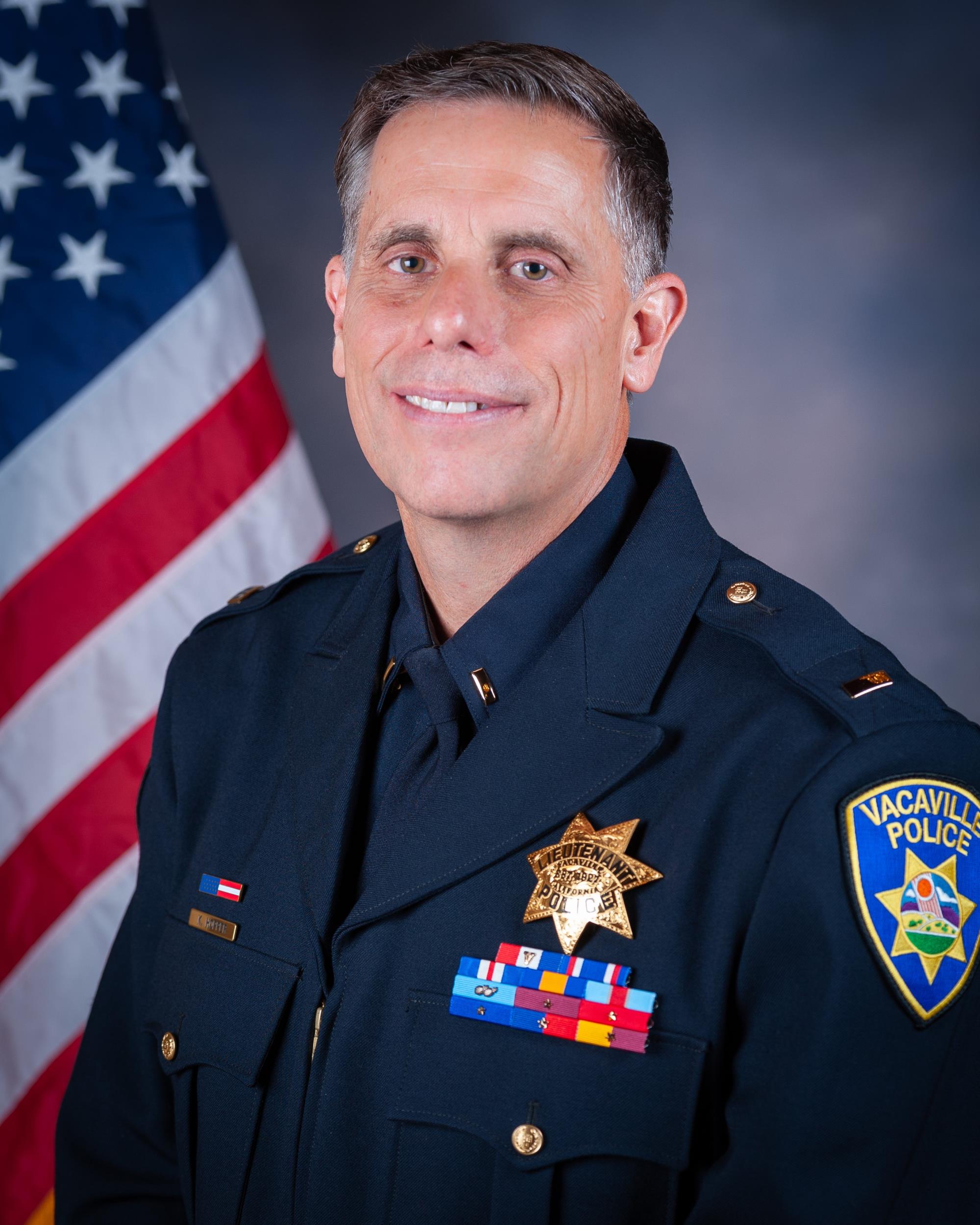 In 2002, Keith began working for the Vacaville Police Department where he served in various roles including Field Training Officer, Gang Detective, and on the Mutual Aid/Mobile Field Force team. Keith promoted to Sergeant in March 2013, where he served as a patrol sergeant, supervisor of the Special Victims Unit, team leader for the Mobile Field Force, and in the Office of Professional Standards.

He was promoted to Lieutenant in July 2018, and was reassigned to his current role as a patrol Watch Commander in the Field Operations Bureau. 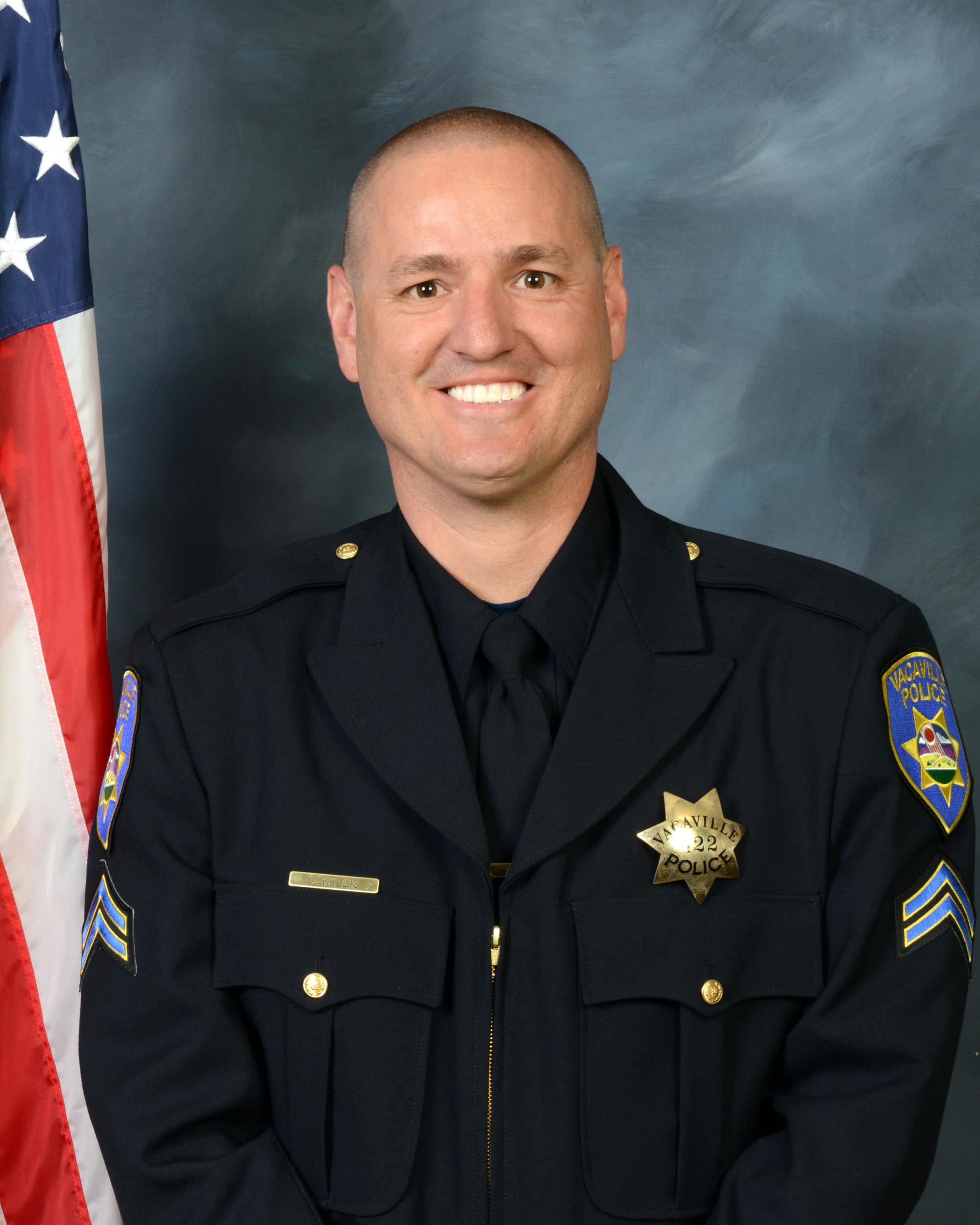 Dave was raised in the City of Vacaville, and began his career with the Vacaville Police Department in 1998. During his career Dave has served the community as a Patrol Officer, Field Training Officer, Defensive Tactics Instructor, Dual Sport Motorcycle Officer, Investigative Services Section Detective, and Special Victims Unit Detective.

Dave promoted to Sergeant in 2014 and was assigned as a Patrol Sergeant. In 2016 Dave became the supervisor of the newly formed Community Response Unit. CRU focuses on issued related to homelessness and quality of life issues. In 2018 Dave was assigned to the department’s Office of Professional Standards.  He was promoted to Lieutenant in August 2019. 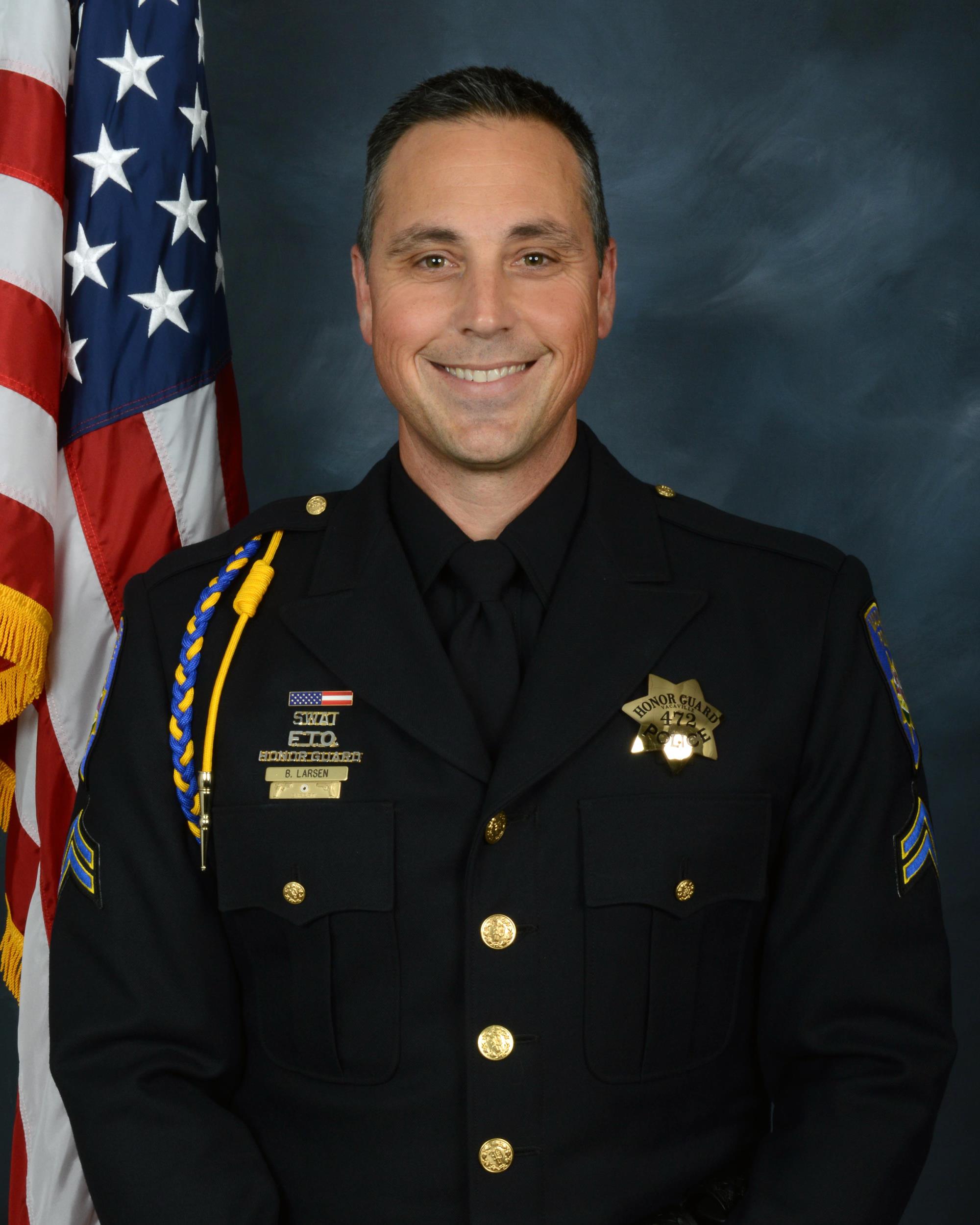 Bryan was raised in Vacaville, and began his career with the Vacaville Police Department in 2001.  He has served the community as a Patrol Officer, Suppression Team Detective, Investigative Services Section Detective and Field Training Officer.  Additionally, Bryan has served as a member of the SWAT Team, Honor Guard and Mobile Field Force.

Bryan promoted to Sergeant in 2016, where he was assigned as a patrol supervisor.  As a sergeant he supervised the Field Training Program, the Department's Range and Firearms Training Program and was a Mobile Field Force Team Leader.  In 2018 he was selected as the supervisor for the VICE unit.  He was promoted to Lieutenant in January 2020.